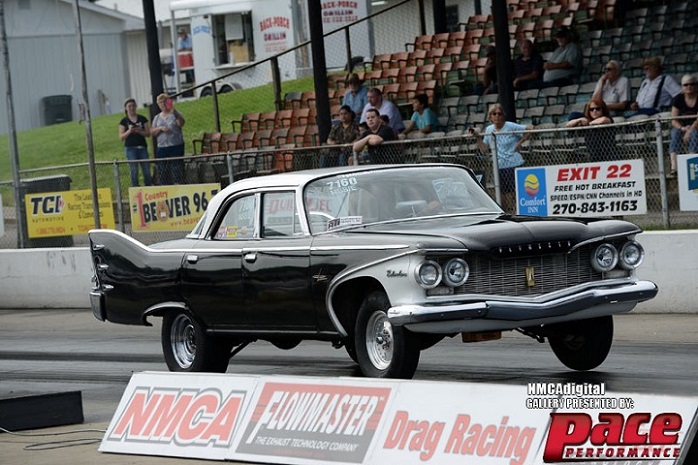 I purchased my car in 1990. At the time, I had no intentions of racing it, though I was a drag racing enthusiast during my youth and college years. It was a cruiser with a 318 poly engine and powerflite tranny. I eventually made my way to the Mopar Nationals fun field (in Indy that year, 1997). Seeing the drag racing there re-sparked my interest in performance and soon after made the decision to build a big block. Since the long ram intake was introduced in 1960, I decided to build an engine with that set up, making it truly unique. It took a while to amass all the parts, but in 2003 she was finished, 451 CID w/'short' long rams, 727 PB tranny and newer sure grip rear. It was still a street car, but I knew it would eventually find its way down the strip.

That first run happened April, 2004 at Huntsville (AL) Dragway, an 1/8th mile track. It was a test & tune session, I was on street tires, and ran a best 8.95@78.62 mph. Tire spin was a problem, time for some slicks. Soon after, I attended a NMCA race in Bowling Green, KY to watch and talk to the Nostalgia Super Stockers racing that weekend. I had realized that my car was a legal combo for that venue. Talked to Mark Artis, Damon Kuhn and happened mention to Arlen Vanke's wife that I was thinking of running my Belvedere in that division. Well she invited me to stay and join them for a group cookout at the days racing conclusion. That convinced me right there that this was the group I needed to race with (though couldn't stay for the cookout).

Entered my first NSS race at the same event the next year (2005). It was my first 1/4 mile run with this car. I was a second slower than the slowest index (NSS/G is a 13.0 second index). My NSS racing was put on hold, though I did do a NSS event at Jackson (TN) dragway, an 1/8th mile track where I was closer to my index. I wanted to run Nostalgia Muscle Car division with a slower indexes, but my car was not legal that year (4 doors). In 2005 NMCA eliminated the 2 door requirement, so I started racing NMC with NMCA.

By the end of 2006, I decided it was time to step up the performance. New aluminum heads (Mopar Performance 452's) were installed and other weight saving measures taken. Small improvement, now consistant 13.9's. After a dyno run at the Music City Mopar Club show in 2007 (September), a cracked cylinder developed on my drive home. For the rebuild over the winter, further step ups were made with a new hotter hydraulic roller cam and an ATI higher stall converter. This brought me down to the low 13's ET 's. The last race in 2008, NMCA finals in Memphis, another cracked cylinder! Put in a thicker sleeve, and let Hastings Race engines (local to me) build the short block.

2010 was significant as I was now quick enough to return to NSS, Monster Mopar Dave Duell Classic in St Louis racing NSS/G. I Could now run the high 12's. Unfortunately, later in the year, came my third cracked cylinder (in Bowling Green). Season done.

Winter rebuild, the decision was made to go with a new block with a 470 stroker kit from Indy Cylinder. Damon Kuhn at Diamondback engines assembled the short block. A higher compression forced race gas, but I had concluded that low octane detonation was the likely cause of my cracked cylinder issues. I also acquired a trailer to start towing to the races. The new engine (with Daimondback carbs) has me in the high 11's, so am now comfortably in NSS/E (12.0 index), as quick as I can go w/o a roll cage.